Follow the White Rabbit into Wonderland to discover amazing bonus features, big payouts, and irresistible characters! Plus, as White Rabbit is a Megaways game, there are potentially thousands of ways to win on any spin. Keep reading our White Rabbit slot review for all the essential details you need to know before you play.

White Rabbit is a 5-reel Megaways slot from Big Time Gaming, inspired by Alice in Wonderland. It features some of the most recognisable characters from the original story, and the graphics are absolutely beautiful. The sleeping caterpillar beside the reels during the base game is a particularly gorgeous addition, while the symbols that appear on the reels are brilliantly designed, too.

The bonus features in the White Rabbit mobile slot are incredible, with free spins, extending reels, and more to discover.

The Red Queen symbol pays up to 25x your stake, and it’s the highest-paying symbol in the game. The Red Gem pays up to 5x, and the Blue and Green Gems pay up to 2x.

Other symbols inspired by Alice in Wonderland include the Cheshire Cat (up to 2x your bet), Tweedledee and Tweedledum (up to 1.9x), and the Mad Hatter (up to 1.3x).

Big Time Gaming’s White Rabbit slot UK has a medium-to-high volatility and an RTP of 97.77%.

How To Play White Rabbit 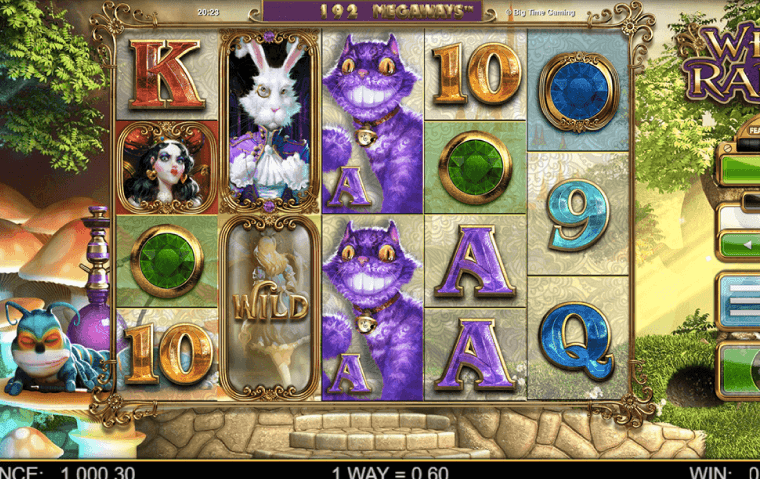 White Rabbit is a Megaways slot. What does that mean? More chances to scoop a prize!

When you play White Rabbit slot, each reel can show 7 symbols on any spin, so there are as many as 16,807 ways to win. But when the Extending Reels kick in during the Free Spins feature, there will be a huge 248,832 ways to win instead!

Press the ‘spin’ button to spin the reels to get started. They will stop and reveal a random set of symbols — you can build winning combinations by matching 3 or more symbols on adjacent reels.

If you want to set up your stake at any time (during the base game), press the arrow buttons in the ‘stake’ section. You can use the Feature Drop option to buy the Free Spins feature — we’ll go into this in more detail below in our White Rabbit slot machine review. 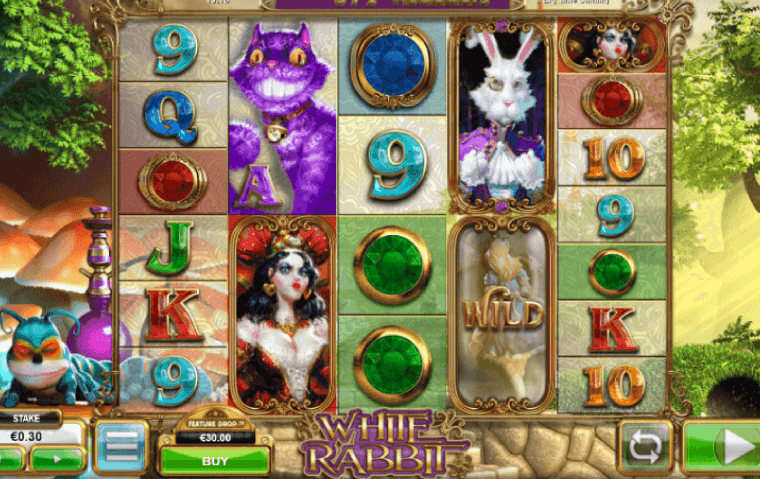 The Wild symbol appears on reels 2, 3, 4, and 5. It substitutes for every other symbol apart from the Scatter, Feature Drop, and Cupcake symbols.

The Caterpillar may randomly add as many as 4 Bonus Wild symbols to the reels during the base game.

The Bonus Wild symbol boosts the value of any winning combination it’s part of by 2 or 3. It also substitutes for other symbols except the Feature Drop and Scatter symbols.

Trigger the Free Spins round to win 15 free spins.

Whenever a Cupcake symbol appears, it will be replaced by 2 different symbols. The number of symbols on the relevant reel will increase by one, and reels can extend to include as many as 12 symbols.

The Extending Reels feature enables extra symbols to be added to any reel during the Free Spins round. This can bring you more chances to form winning combinations and rack up prizes!

If a reel reaches the maximum of 12 symbols, the feature will be retriggered. And the Queen’s Reel will be used instead — this is an enhanced reel featuring additional Wilds and Red Queens.

We’re stunned by White Rabbit, and we think you will be too! Big Time Gaming has packed this game with stunning visuals, great bonuses, and high payouts. So, what are you waiting for? Take a journey into a fantastical world and play White Rabbit at LordPing today!