Dive into Norse mythology and win up to 10,000x your bet in Valkyrie Fire! See if the stunning warrior at the heart of the game can help you grab the top prize, discover how much the legendary Odin is worth, and trigger free spins with valuable Stacked Wilds.

Lordping’s expert team writes in-depth reviews of our most popular games, bringing you all the essential info you need before you start playing. And our Valkyrie Fire slot is packed with helpful details, from the symbols and prizes to the RTP!

Norse mythology is a popular theme in the world of slots, but Valkyrie Fire is one of the best Norse-inspired games on the market. The slot revolves around the titular Valkyrie, a beautiful, powerful warrior with golden hair and mighty weapons. It’s played on five reels, three rows, and 10 paylines.

As the game is set in Asgard, there are plenty of exciting and imaginative visuals throughout, including Odin, Frost Giants, magical weapons, and more. Valkyrie Fire much more to recommend it than its good looks.

Such as? Well, there’s the Wild symbol that doubles prizes when it forms part of a winning combination, the Free Spins feature, Stacked Wilds, and generous payouts on offer! Read more about these later in our Valkyrie Fire online slot review.

The Frost Giant and Odin symbols are worth as much as 750x your bet. If you match three or more Ship symbols, you’ll win as much as 400x.

Barcrest’s Valkyrie Fire mobile slot has a 96% RTP and medium volatility. You can place bets of between 0.10 and 500 per spin.

How To Play Valkyrie Fire 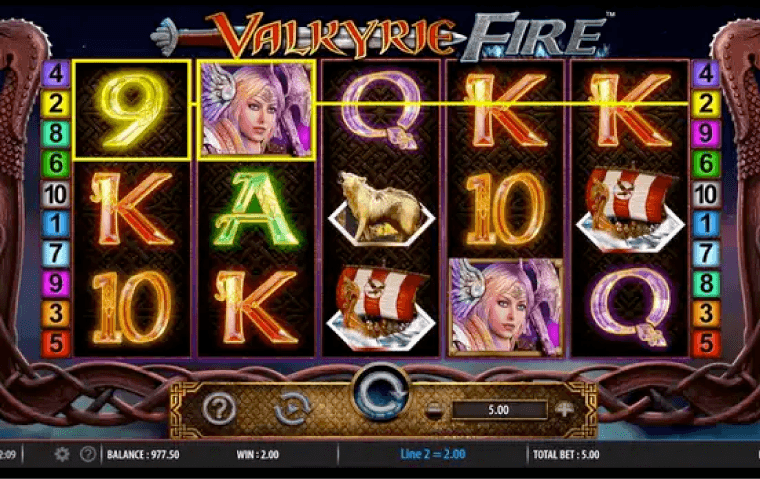 Valkyrie Fire uses a standard slot layout and controls, so it should feel familiar if you’ve played other 5x3 slots previously.

The first step you may want to take is to set up your stake. Use the ‘-’ and ‘+’ buttons on either side of the bet display to change your wager. Your current bet is always shown at the bottom of the screen for your convenience.

When you’re ready to play Valkyrie Fire slot, tap the ‘spin’ button and watch the reels start spinning! Match two or more high-paying symbols, or three or more low- and medium-paying symbols, to win a prize. There are some massive payouts available, especially with the Valkyrie symbol!

You can check the rules and other key information via the ‘?’ button on the game panel. It’s recommended that you browse the help section before you try the Valkyrie Fire casino slot for the first time. 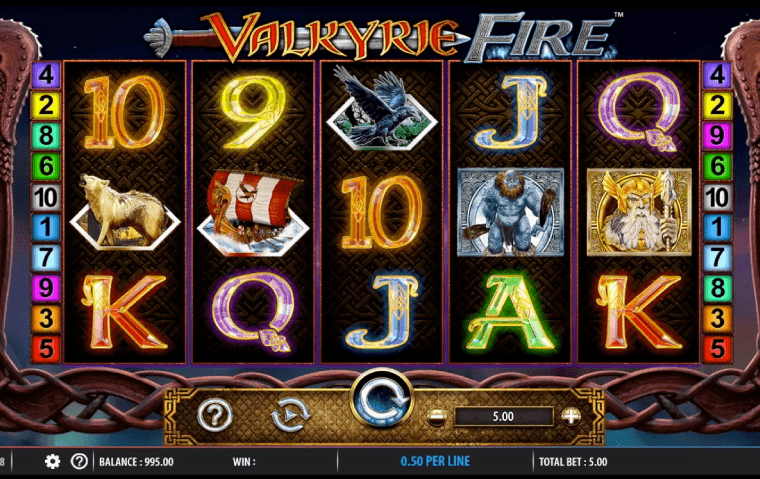 The Valkyrie symbol is Wild and substitutes for all other symbols except the Scatter.

But that’s not all: the Valkyrie symbol also doubles the value of any winning combination that it appears in!

The Scatter symbol, featuring the flaming shield, is the second-highest paying symbol in the Valkyrie Fire slot UK. Land three or more to win up to 5,000x your bet.

Match three or more Scatters anywhere to trigger the Free Spins Bonus feature and win 10 free spins. This is played with the same stake as the triggering spin.

Fire Stacked Wilds may appear on any reels during the Free Spins Bonus feature. They substitute for every other symbol (as the Scatter doesn’t appear on free spins).

Valkyrie Fire is an amazing five-reel slot inspired by exciting Norse myths and legends, featuring fun character designs and an epic atmosphere. You can also win free spins, build more valuable combos with the Fire Stacked Wilds, and claim up to 10,000x your bet. So, what are you waiting for? Sign in and play Valkyrie Fire at Lordping now!