Slingo Originals and Inspired Gaming have collaborated to bring you the mighty Slingo Centurion Slot Machine. March to the beat of the drum while spinning the slot reels to remove numbers from the Slingo grid. Every slingo you get moves your army up the bonus ladder on the left, where powerful Centurion features await. Every battalion has its foes, and yours are devils, which block number matches on your grid. The Jokers, on the other hand, are your allies, assisting your grid invasion by allowing you to mark off any number from the column. Join us to the end of our Slingo Centurion Slot Machine Review and learn more about the game, its technical features and bonuses. 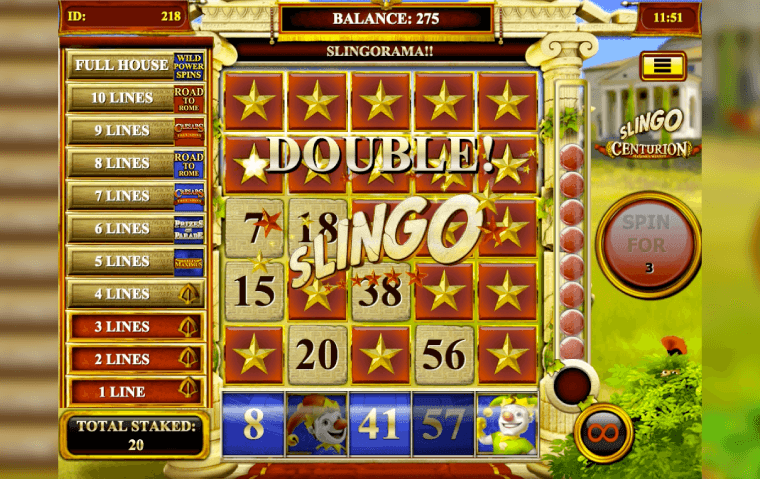 There aren't many distinguishable symbols in the Slingo Centurion slot. The reels are mostly filled with number symbols. The joker, super joker, coin symbol, and devil are among the special symbols.

When you land one, two, three, or four Slingo lines on the bingo card, don't expect to win standard payouts. This slot's payouts are the various bonus games that are triggered when five lines or more are landed.

The RTP for Slingo Centurion Slot UK is 95.25% which is below the market rate. Volatility is medium which may be a factor in landing those matching numbers on your Slingo grid.

How To Play Slingo Centurion 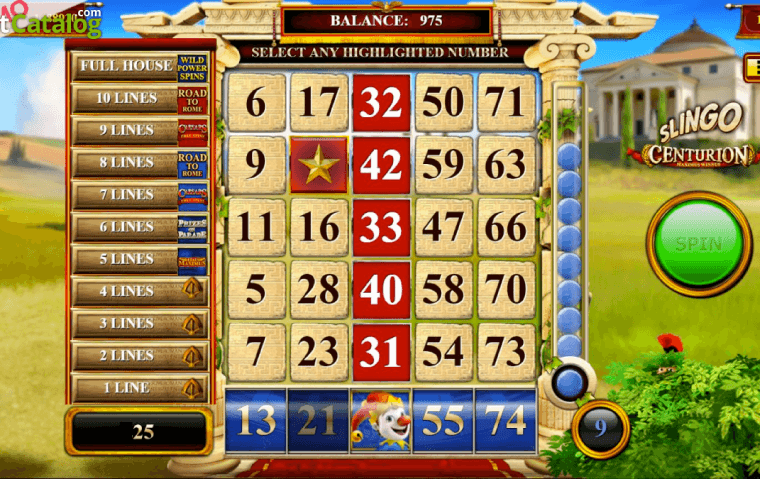 To play Slingo Centurion Slot is a march in the park. The goal of Slingo Centurion Casino Slot is to create a five-number line that can be horizontal, vertical, or diagonal. With Centurion, you get ten spins. Each spin yields five numbers from the 5x5 grid. If any numbers match, they are crossed out. You advance up the prize board when you complete a row of five numbers. The more lines you complete, the higher you move up the prize board. During the game, you can win free spins, wilds, or devils. The latter prevents you from marking a number off. The centurion in the bush will occasionally appear to "guarantee" a free spin or mark off three numbers on your next turn.

You'll soon be marching into the bonus rounds if you spin the reel to match and mark off the numbers on it with the numbers on the grid. The first one starts at 5 slingos, but the more winning lines you complete, the better the bonus features you'll get.

You'll be able to spin the regular 5x3 slot reels, collect additional free spins with multipliers, and even participate in a board game-style round throughout the 7 different bonus rounds.

The first bonus is Reelus Maximus, which is triggered by landing five lines on the bingo card. It will launch a slot game in which you can spin the reels with a giant symbol on the first three reels.

Then there's Prizes on Parade, which can be triggered by landing six lines on the card. It's a bonus game in which you can collect cash prizes on the shields. At the end, all prizes will be added together.

The Slingo Centurion Online Slot Review concludes with a great game for players looking for something new and exciting. Even if you are new to slots, Slingo Centurion is easy enough to enjoy. It is best played at Lord Ping where your security and enjoyment is a priority. Lord Ping offers over 1,000 games from leading developers.