Take a walk on the wild side in Lightning Leopard, an ice-cool slot from Lightning Box! Come face to face with wolves, bears, and the titular leopard as you play for huge wins. There are four jackpots to be won and two awesome bonus features to discover on any spin too!

Welcome to Lordping’s blog, home of in-depth reviews on some of our most popular games online. Read our Lightning Leopard slot review to find out how to play this game, what prizes it offers, and more!

The Lightning Leopard casino slot is played on a 5x3 grid with 40 fixed paylines. The game has a Native American theme, and is set in North America during winter.

The background scene, behind the reels, features snow-capped mountains and rocks underneath a starry sky. Even the playing card symbols are coated with snow to add to the wintery style! Atmospheric music plays in the background to create a more immersive setting.

The four jackpot prizes are displayed on the right-hand side of the screen at all times. You will have a chance to win any of these during the two bonus features — read on to find out more!

The Native American Woman pays between 2 and 300 coins if you match two to five on a payline. The mighty Bear is worth up to 250 coins, and the Mountain Goat pays up to 200 coins.

Land the Wolf or Snow Flakes symbols to win between 10 and 130 coins. The Ace and King award a maximum of 40 coins, while the Queen and Jack pay a top prize of 20 coins.

How To Play Lightning Leopard 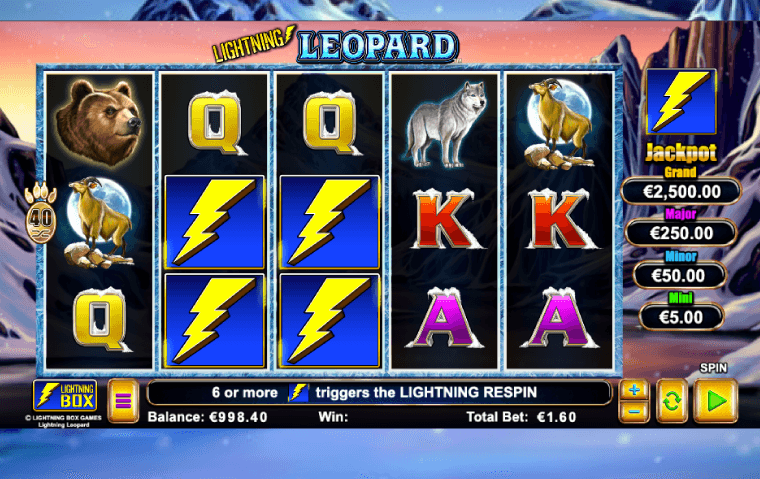 Ready to play Lightning Leopard slot? Press the ‘spin’ button in the lower-right corner to start spinning the reels. If you can land two or more matching symbols on any of the paylines, you’ll win the corresponding prize shown on the paytable. Match six or more Lightning Scatters to trigger a bonus feature.

Use the ‘+’ and ‘-’ buttons to adjust your bet between spins. If you want to browse the paytable and game rules, press the menu/hamburger button on the lower-left part of the screen. 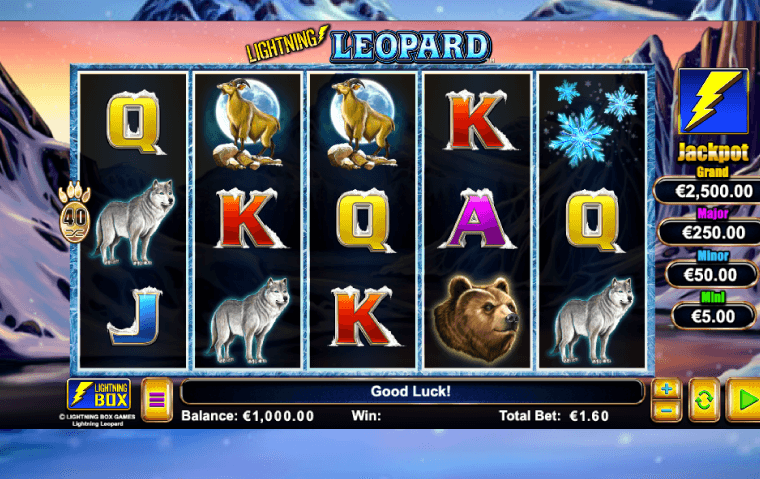 The Leopard symbol is Wild and substitutes for all other symbols except the Lightning Scatter.

Land between six and 13 Lightning Scatters to trigger the Lightning Respin feature.

When you trigger this Lightning Leopard slot bonus feature, you’ll win three respins with the triggering Lightning Scatters locked in place. The rest of the symbols will respin: any additional Lightning Scatters will stay in place and the number of respins left will reset to three.

Standard payouts are unavailable during this round, but at the end of the feature, all Lightning Scatters will be flipped to reveal prizes!

Jackpots may be awarded at random when the above two features end. The jackpot values are fixed, so they’re not progressive.

If a Mini, Minor, Major, or Grand symbol is shown when the Lightning Scatters are flipped at the end of the bonus features covered above, you’ll win the corresponding prize!

The Mini, Minor, and Major prizes can be awarded more than once in each bonus feature. However, the Grand can be won just once in each feature.

Lightning Leopard is a striking five-reel slot from Lightning Box, taking you into the heart of the North American wilderness. Play for wins of up to 600 coins in the base game and bigger jackpot prizes in the two bonus features. Now that you’ve read our Lightning Leopard slot machine review, play it here at Lordping now!