Step into the battle arena and take on deadly warriors in Game of Gladiators! This unique slot boasts unbelievable graphics, awesome bonus features, and a maximum payout of 5,000x your bet. Read on to find out everything you need to know about this sensational game in our Game of Gladiators slot review.

Play’n GO’s Game of Gladiators is one of the most impressive slots on the market. The superb visuals are crammed with authentic details and excitement, from the roaring tiger to the gladiators clad in gleaming armour. Cinematic music plays throughout, too, creating a truly epic atmosphere.

On top of all that, the Primus bonuses and the Free Spins Battle Feature are unique additions that make Game of Gladiators feel totally unlike any other gladiator-themed slot online.

The symbols include four gladiators: Scissor, Provocator, Murmillio, and Retiarius. Each gladiator has their own look, with unique helmets, weapons, and armour.

Scissor pays up to 20x your bet, Provoactor awards up to 15x, and Murmillio and Retiarius offer a maximum of 10x.

Royal symbols appear, too. The Ace and King pay up to 2.50x your bet, while the Queen and Jack pay up to 1x.

We’ll cover the Wild and Scatter symbols later in our Game of Gladiators online slot review.

Play’n GO’s Game of Gladiators slot UK is a high volatility game with a 96.42% RTP.

How To Play Game of Gladiators 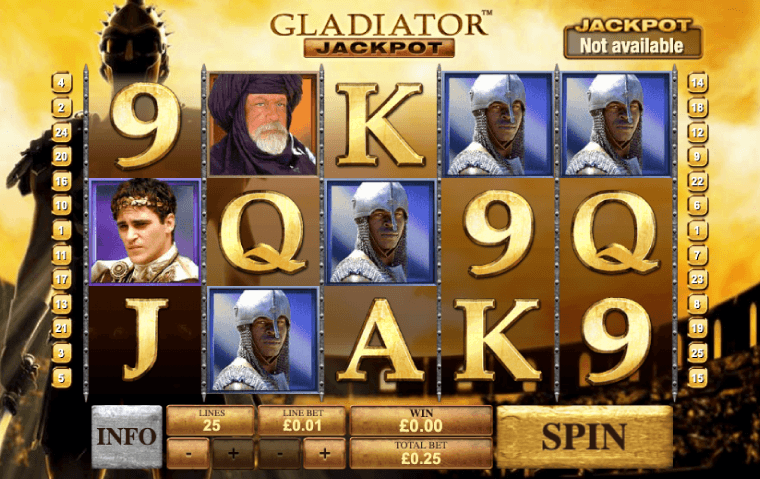 When you play Game of Gladiators slot on any device, you’ll find it easy to dive in! Pick one of the bet options at the bottom of the screen to get started — you can bet between £0.20 and £100 per spin. Use these buttons to change your stake between any spin during the base game.

Press the ‘spin’ button to spin the reels and see if you can match between 3 and 5 symbols on any of the 20 paylines. You may trigger the bonus feature if you land enough Scatter symbols — you can read more about this below in our Game of Gladiators online slot review. 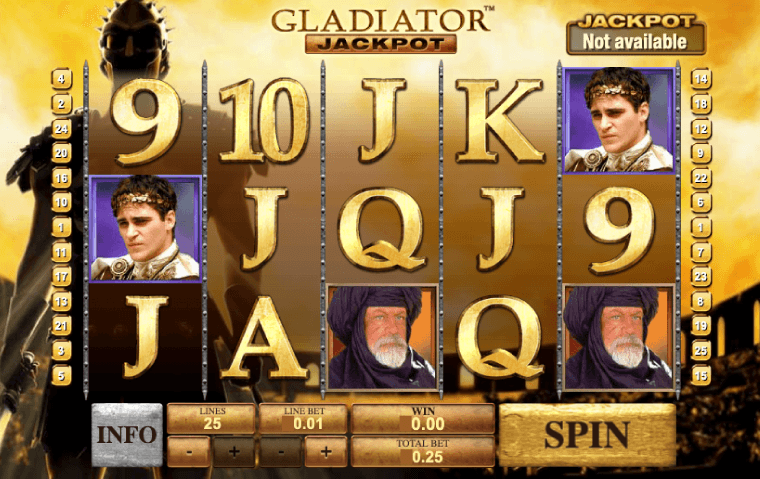 The Tiger symbol in Play’n GO’s Game of Gladiators casino slot is Wild. It substitutes for all other symbols except the Scatter, and pays up to 25x your bet.

The main Scatter features a gate to the arena. Your chosen Champion symbol will act as a Scatter during the bonus round, too.

During the Free Spins Battle Feature, all Wilds expand to become Mega Wilds.

The Game of Gladiators slot bonus round, the Free Spins Battle Feature, is unique.

First, match 3 Scatters to trigger it, then pick your Champion: Spartacus or Amazonia. Each Champion awards a Victory Bonus if you win the battle — a Feature Retrigger for Spartacus or a 20x to 100x Bet Multiplier for Amazonia.

Next, the free spins begin. Each Champion performs one attack, which awards a battle prize. During this bonus feature, matching gladiator symbols landing on the reels are formed into a specific set and added to the Battle Meter at the top of the screen.

The number of symbols you collect determines the size of your Battle prize. Check the Battle Prize paytable before you play — this lists the various values for each gladiator symbol.

Each Champion symbol that lands prompts an attack on a symbol set and wipes it out. You have unlimited free spins until you either take all symbol sets out of the game or you fill the Battle Meter with your collected gladiators.

Multiple Primus bonuses are available in the Game of Gladiators mobile slot. These are randomly awarded at the start of any spin:

We were stunned by this game when writing our Game of Gladiators slot machine review. The level of innovation in certain areas, such as the battle-based bonus feature, demonstrates Play’n GO’s immense skill in crafting high-quality games. Give Game of Gladiators a try at LordPing now and we’re sure you’ll be impressed, too!