Blast off for an adventure beyond the stars in Fluffy in Space! Join the Fluffy gang on a quest to win up to 500x your bet, unlock free spins, and trigger the Fluffy in Space feature for extra free chances to grab a cash prize! Keep reading our Fluffy in Space slot review for more on this irresistible game.

Fluffy in Space is an unbelievably cute slot game created by Eyecon, and is part of the popular Fluffy series. This is played on a 5x3 grid with 25 paylines.

Fluffy in Space takes the Fluffy team from the fairground to outer space. The reels are set against a starry sky and most of the characters wear an accessory to help with their spacefaring. For example, check out the Lion in the helmet and the Duck in a jetpack!

You can play two terrific bonus features, too, each offering free spins and extra opportunities to win! You can read more about these later in our Fluffy in Space online slot review.

If you’ve played any other slots in the Fluffy series, Fluffy in Space’s colourful, sweet symbols should be familiar to you.

The Nellie Scatter is the top-paying symbol, awarding up to 500x your stake during the Fluffy in Space feature. The Rocket awards up to 200x, while the Hippo, Dragon, Gorilla, and Panda pay up to 150x each.

You’ll win up to 75x with the Lion and Turtle symbols. Finally, the Horse, Rhino, Duck, and Fish pay a maximum of 50x each.

Eyecon’s Fluffy in Space casino slot has a 96% RTP and high volatility.

How To Play Fluffy in Space 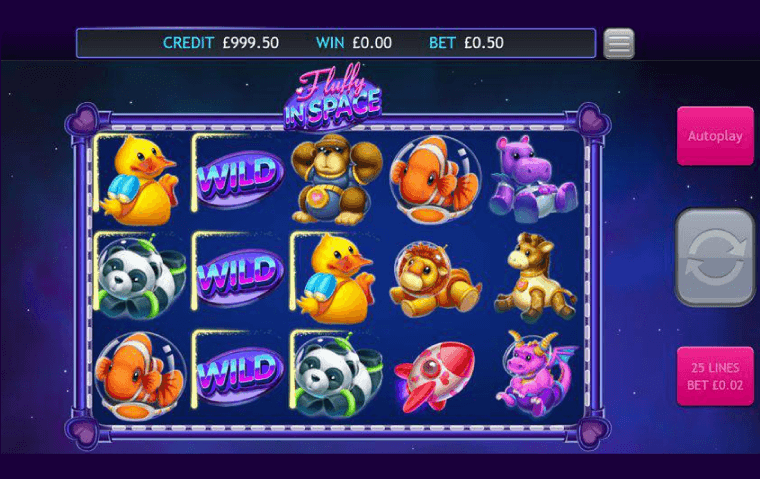 When you’re ready to play Fluffy in Space slot, tap the ‘spin’ button. The reels will spin briefly then stop to show 15 random symbols — if you land three or more matching symbols on a payline, you’ll win a cash prize!

You may trigger one of the bonus features, too, if you match enough of the two Scatter symbols. You can bet between 0.25 and 12.50 on Fluffy in Space. Use the ‘bet’ button to open the bet setup menu, then adjust your stake with the slider bar.

Press the menu button at the top of the screen to access the settings menu, then choose ‘help’ to browse the paytable and rules. 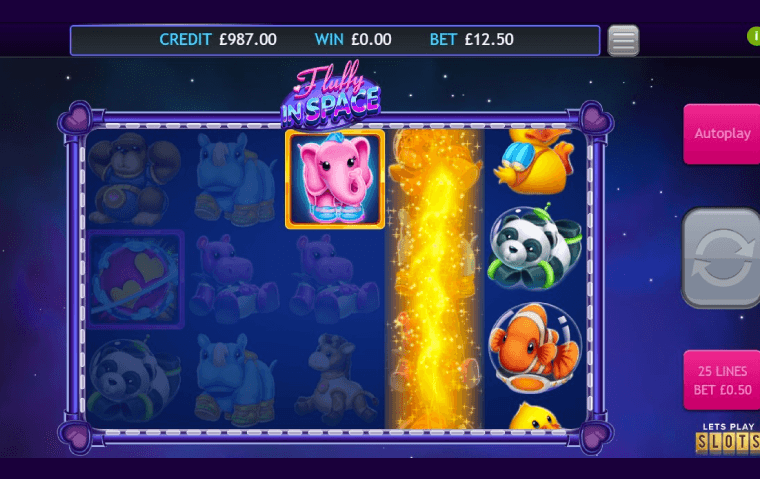 The Wild symbol substitutes for every other symbol except the Planet and Nellie Scatters. It can only land on reels 2, 3, 4, and 5.

There are two Scatter symbols in the Fluffy in Space mobile slot:

Land three Planet Scatters to activate the Free Games feature and win six initial free spins. You can retrigger this Fluffy in Space slot bonus round to win three more free spins — and you can retrigger it up to 50 times!

The Fluffy in Space feature can be triggered during a free spin, and all free spins are played with the same bet and paylines as the triggering spin.

Match three or more Nellie Scatters anywhere on the reels to play the Fluffy in Space feature. The Nellie Scatter can appear on any reel during this bonus round, and may land in stacks of two.

Each Nellie Scatter will reveal a prize of up to 500x your stake. When you have used all of your free spins or there are 15 Nellie Scatters on the screen, the Fluffy in Space feature will end.

Now that you’ve read our Fluffy in Space slot machine review, give the game a try! We’re sure you’ll be as wowed by its charming characters, generous payouts, and awesome bonus features as we are. Sign in and take a spin on Fluffy in Space at LordPing today!