Lord Ping graciously invites you to an in-depth Five Pirates online slot review. Prepare to hit the high seas for some swashbuckling adventures in this slot created by Lightning Box. Keep on reading to find out what the Lord himself has to say about this game.

Lightning Box created the Five Pirates online slot. The Five Pirates Casino slot is a very unpredictable game that features a 95.49 percent RTP and 1,024 possibilities to win across its five reels. Hold n' Spin and Barrel Bonus are two of the game's special features.

Why not stowaway on a pirate galleon for a sailing adventure in the Five Pirates slot online? This high variance slot offers long-term appeal, with eye-catching symbols across five reels, 1,024 ways to win, and decent bonus opportunities.

The Five Pirates slot is a simple to set up and play game that can be enjoyed on your laptop, phone, or tablet. Get on board and sail with Lord Ping!

Lightning Box slots frequently have some wonderful added touches that make them stand out, and one of these is the soundtrack. Expect to hear a stormy sea, squawking seagulls, and sea shanties played on an accordion.

The Five Pirates slot UK has the following on-theme symbols:

Lord Ping would be remiss if he forgot to talk about the RTP and volatility in this Five Pirates slot review. The Five Pirates slot has a theoretical return to player that’s a little below the market average at 95.4%, but this does come with a medium volatility rating that should make it suitable for players of almost every skill level.

How To Play Five Pirates 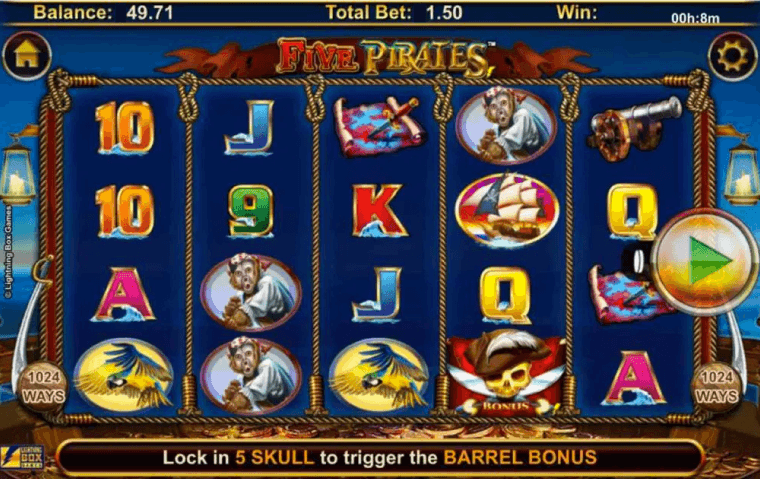 To Play the Five Pirates slot, follow these steps: 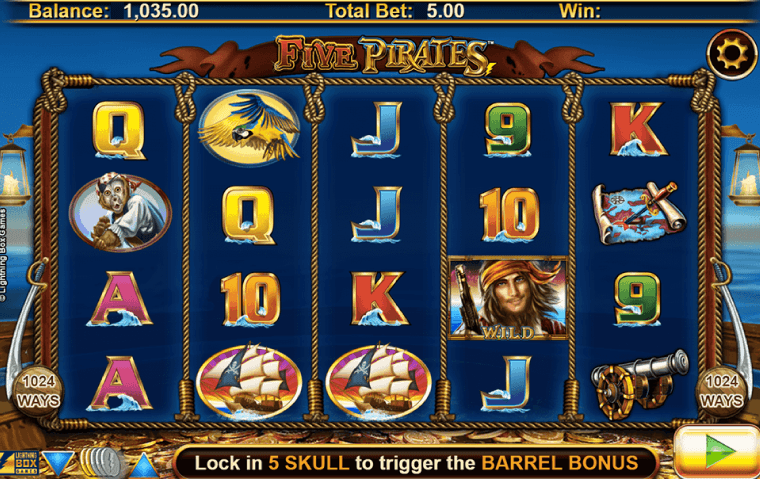 The Five Pirates Slot Bonuses are as follows:

A male pirate is the wild. This symbol only appears on reels two and four and replaces all symbols save the skull and crossbones scatter.

This bonus game is triggered when two, three, or four skull scatters appear on the reels at the same moment, locking them in place and spinning the remaining reels at least three times. During the free spins, there may be more opportunities to collect more scatters and continue the pattern. If all five reels are locked in, a bonus called the Barrel Bonus is awarded.

Players select barrels at random in this second-level bonus game. Each one displays either a green arrow directing you to continue on to the next barrel or a stop sign indicating the multipliers and free games gained, as well as ending the bonus game.

If you’re a fan of the pirate slots genre, then the Five Pirates slot machine is certainly a well-designed example from the genre. There are a few nice and unique bonus features, and Lightning Box have done a great job of making a cohesive and immersive theme. Sign up and play today at Lord Ping.