Welcome to another Lord Ping review where today we’re getting a bit nautical by bringing you an Emperor of the Sea online slot review. This slot machine is about the early oriental seafarers and their superstitions, so if you get seasick you might want to steer clear of this one. For those who have their sea legs, however, it’s time to dig into our Emperor of the Sea slot review.

Emperor of the Sea Slot Details and Features

The Emperor of the Sea slot UK has a unique game mechanic. It allows you to play with 36, 68, or 88 paylines instead of the standard fixed paylines. It has five reels, four rows, and one bonus round, with a top non-progressive payout of 1,000 coins.

It's an Asian-themed slot that takes you on an epic quest for riches and heavenly fortune across the land of the Dragon Emperor's Kingdom.

The Emperor of the Sea slot machine has a 96.5 percent average return to player percentage (RTP). You'll notice the game's vibrant Asian theme throughout as you play. The lowest stake per spin is £0.38 and the highest is £44. The Emperor of the Sea casino slot can be played for free or for real money on PC desktops as well as mobile phones such as Androids, iPads, iPhones, and tablets via the mobile slot.

Because the ancient Chinese were a seafaring society whose ships went to various countries laden with Oriental artifacts and treasures for bargaining, the game incorporates a range of symbols throughout the reels to match the concept. On the reels, you'll see a traditional Chinese sailing ship, a tortoise, some exquisite Koi fish, and precious jade vases. The most essential emblems are the highly prized Chinese golden ingots, also known as Sycees or YuanBao, which are a powerful symbol of good fortune and luck.

The Emperor of the Sea slot, like most online slot games, features playing card symbols. The playing cards 9 through A are portrayed on the reels, which are all nicely constructed in vibrant colors.

The volatility of the Emperor of the Sea slot online is set at medium and there’s a theoretical return to player on offer in this game of 96.5%.

How To Play Emperor of the Sea 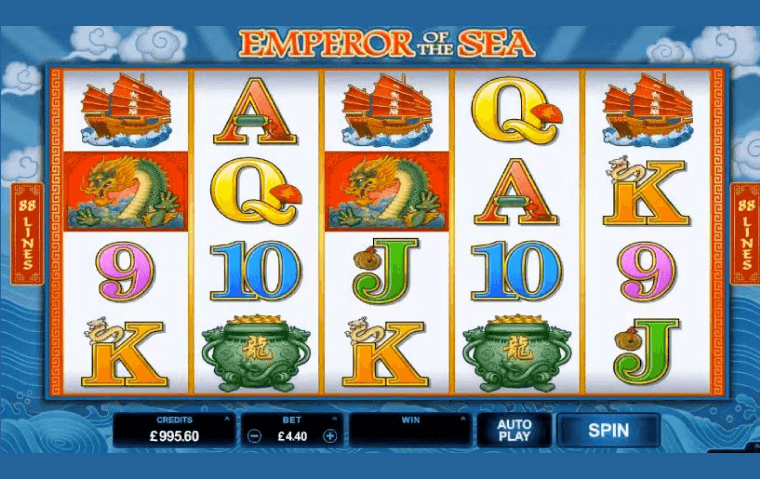 To play the Emperor of the Sea slot machine load the game at Lord Ping. Before you begin playing the Emperor of the Sea casino slot, you must first determine your bet amount. The 'bet' button is used to do this. A dropdown menu will appear, allowing you to modify your bet. Players must select the size (or value) of their coins, as well as the number of coins they wish to gamble on each line. Because the Emperor of the Sea online slot has 88 paylines, your wager can be quite large, but even at the low end of the settings, wagers are still very affordable for beginners and casual players.

Once you're happy with your settings and wager amount, simply press the spin button to begin. The reels will then spin and stop at random. A prize payout is awarded when three or more matching symbols appear across a pay line (beginning from the leftmost reel). How much you are paid is determined by the paytable. 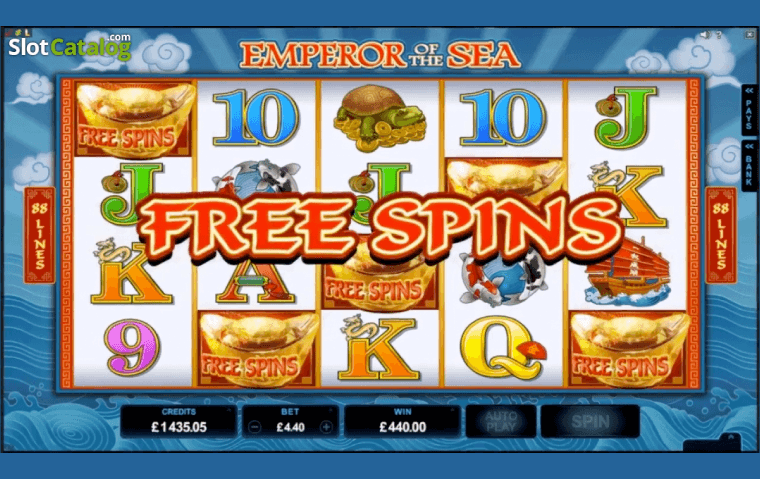 The Emperor of the Sea Slot Bonuses are as follows:

Three or more of the scatter symbol, which resembles a golden hat, in any reel position inside a single game awards Emperor of the Sea free spins. During the free spins round, players are offered 8 free spins and several features become available.

Players are awarded stacked wilds that increase by one with each spin to help them stack up.

All wins from the free spins symbols are also susceptible to 'rolling reels,' which are similar to cascading reels in other slots and can result in a chain reaction of several wins from a single winning spin.

The Emperor of the Sea slot logo is the game's wild symbol, and it may be used to generate winning combos in place of all other symbols save the scatter. It can also appear on the reels as a stacked symbol.

Review Summary of Emperor of the Sea Online Slot

If you’ve enjoyed our Emperor of the Sea slot machine review and want to sail the seas yourself, then sign up and play today at Lord Ping.