Discover what treasures the Crazy Genie has in store for you in Red Tiger’s magical slot! Take a spin on the Wheel of Bonuses to play five different bonus features with lots of cash prizes up for grabs. And you could win up to 300x your bet if you match enough of the top-paying symbols on any spin!

Welcome to Lordping’s blog, where we delve deep into some of the most popular games online — including Crazy Genie! Check out our Crazy Genie slot review to find out more about this enchanting game, from its top prizes to its bonus features.

Crazy Genie is a magic-themed slot starring a big, blue, friendly genie! He’s regularly on screen while you play, and Red Tiger has brought him vividly to life with amazing animations and charming facial expressions. The other characters in the game, such as the walking magic carpet and the cobra coiled around a stack of gold coins, are likeable too.

Red Tiger’s Crazy Genie mobile slot is played on five reels and three rows, with 20 paylines. The base game takes place in an Arabian market street, with the reels framed by golden posts, rugs, and the Genie’s magic lamp.

The scene will change, though, if you trigger one of the bonus features (for example, the Oasis Bonus round is set in a luxurious garden). Whatever the background image is, though, Crazy Genie looks outstanding from start to finish!

The lower-paying symbols include standard playing card suits, each awarding different prizes. The Ace, King, and Queen are worth up to 80x, 60x, and 50x, respectively. Match three Jacks to win up to 40x your bet or three 10s for up to 30x.

A Wild and Scatter symbol can appear on the reels on any base game spin. We’ll explore how these work later in our Crazy Genie online slot review.

How To Play Crazy Genie 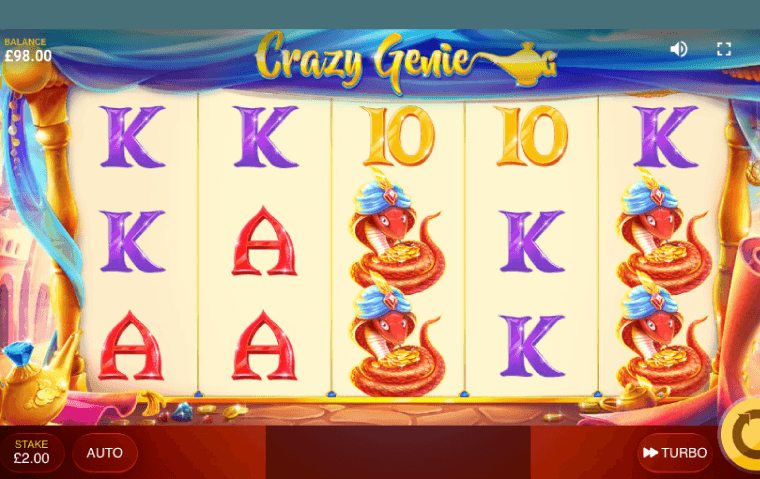 To play Crazy Genie slot, you may want to start by setting up your bet. Press the ‘stake’ button to open the bet menu, then just click on your preferred wager.

Next, tap the ‘spin’ button and watch the reels spin to see if you can match three or more symbols on a payline. You might land bonus symbols, too, which will trigger the Wheel of Bonuses and award one of five bonus features!

Tap ‘pays’ to check out the paytable, which covers the various symbols and bonuses, or ‘help’ to read the rules in detail. 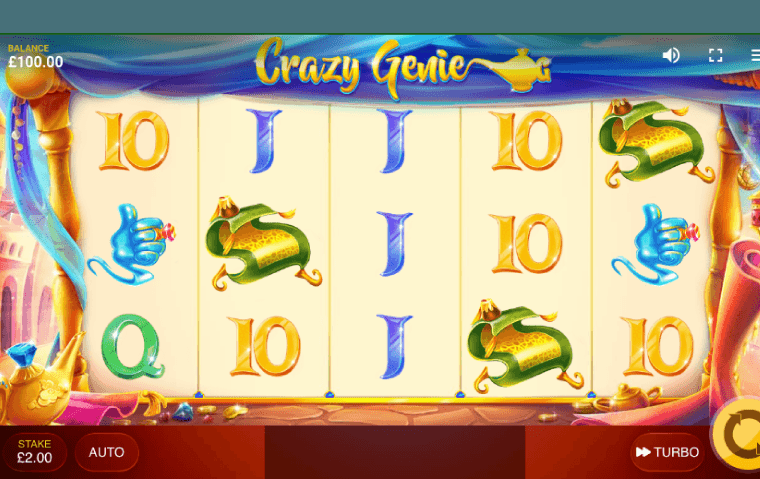 The Crazy Genie Wild awards 30x, 100x, and 300x your bet for three, four, or five on a payline. It also substitutes for all paying symbols.

Land three Magic Lamp symbols on reels 2, 3, and 4 to take a spin on the Wheel of Bonuses! The Genie may also award any of the following bonuses himself.

The reels are filled with gold coins — spin them to win generous prizes!

The Genie offers you a selection of mysterious gifts — pick one to see what you get!

You’ll be presented with a range of treasures from the Genie’s cave. Pick one to discover how much you’ve won!

Rub the magical Genie’s Lamp to win a prize!

This feature focuses on a lamp-shaped pinata. Click on the pinata: the Genie will hit it with his stick to reveal gold coins and award prizes!

You can always rely on Red Tiger for a well-designed game, and Crazy Genie is no exception. This slot looks stunning on screens of all sizes and offers you the chance to play five different bonus features, with 300x your bet up for grabs. Want to try it after reading our Crazy Genie slot machine review? Play Crazy Genie at Lordping now!