Join the KVWN news team and play for tasty wins in Anchorman, inspired by the popular comedy film starring Will Ferrell! You can trigger several bonus features with different gameplay styles and prizes, based on the movie’s main characters. Read our Anchorman slot review below for the lowdown on this unique game.

Anchorman is a 5x3 slot with 25 paylines, though you can play with more during certain bonus features. Bally has used the story, characters, and gags brilliantly to create a slot that feels true to the movie. You’ll see Ron, Brick, Baxter, and the rest of the team while you spin the reels!

Several video clips and sound effects from the movie play at times throughout the game, too, including Ron speaking to Baxter. You may hear recogniseable tracks, such as ‘Afternoon Delight’ and ‘Every 1’s a Winner’, too, which help to capture the spirit of the film.

Multiple bonus features are available, from Ron Reels to the Big Bonus Reel. We’ll explore these in more detail later in our Anchorman online slot review.

Dozens of symbols appear on the reels in the Anchorman casino slot, across the base game and bonus features. These include images of characters from the movie and related objects, including Champ’s hat, the news team’s van, a glass of whiskey, and more.

In the base game, Ron is the highest-paying character, while Champ, Brick, and Brian pay the same.

Bally’s Anchorman slot UK has a 96.03% RTP and medium volatility.

How To Play Anchorman 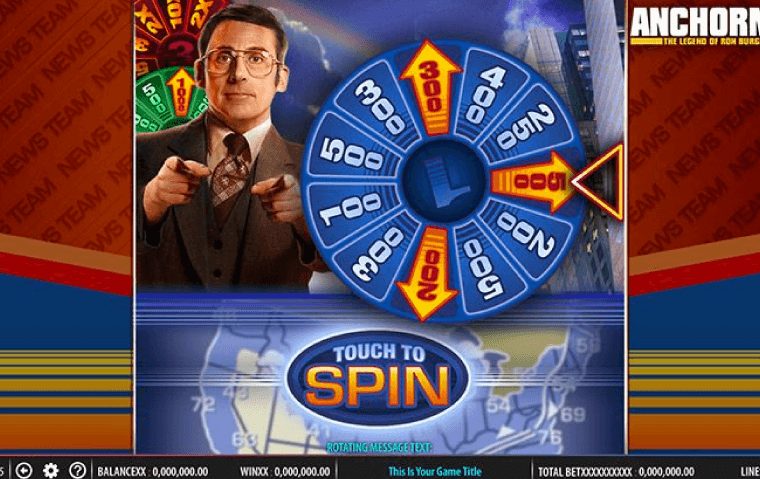 Tap the ‘spin’ button to play Anchorman slot. The reels will spin for a few seconds then stop to reveal 15 random symbols. If you can match 3 or more symbols on any payline, you’ll win a prize! You may also trigger a bonus feature, too, for extra chances to win.

Press the ‘?’ icon to open the help section. We recommend that you check out the paytable and rules before you try Anchorman for the first time. 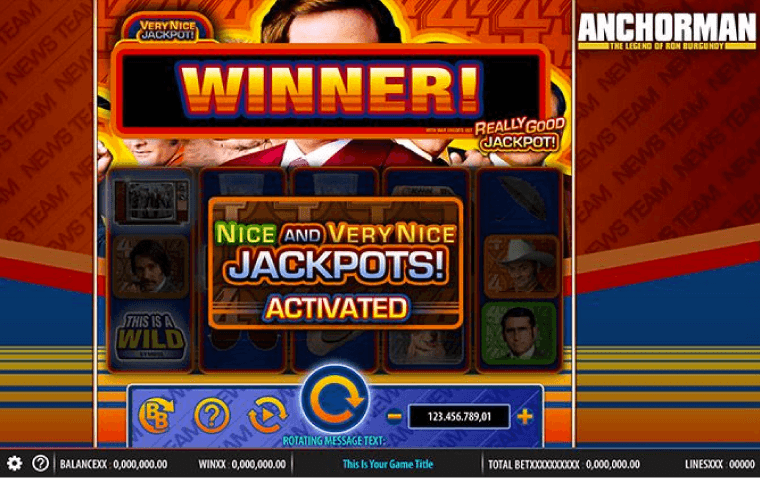 The cleverly named ‘This is a Wild’ symbol is Wild. It substitutes for all other symbols except the Whammy and Bonus.

The Bonus symbol is the Scatter. It can trigger the Big Bonus Reel, which leads to multiple bonus features.

When playing the base game, the reels may become Ron Reels, and a smaller selection of symbols will be used.

If the reels don’t become Mystery Stack Reels or Ron Reels during the base game, and 3 Bonus symbols won’t land anywhere, the Baxter Wilds feature may be activated instead.

Land 3 Bonus Scatters on reels 2, 3, and 4 to win a spin on the Big Bonus Reel. You may receive cash prizes, jackpots, or a chance to play one of multiple features:

There are 3 Jackpots: Nice Jackpot!, Very Nice Jackpot!, and the Really Good Jackpot! Three cash prizes are available, too, based on your current stake.

This feature is played with a different set of symbols, including a giant Ron, and on 19 rows!

A new set of symbols, including the Whammy, is used during this feature. You can win 12 free spins.

This feature includes a Blue, Green, and Red wheel. Each one offers different prizes.

Pick 3 bottles of Sex Panther from a set of 15 to reveal prizes between 0.60 and 3.00. You may find extra picks, too, so you could keep this feature running for longer!

You’ll also pick a packet symbol at the end to find a multiplier of 2x to 10x.

Anchorman is a brilliant slot adaptation of the hit comedy film, and it’s packed with great features to boost your wins. Music, characters, and even video clips from the movie appear while you play, so it’s a must if you’re a fan. Now that you’ve read our Anchorman slot machine review, play it at LordPing to discover its immense charm for yourself!